The iconic Sonar Tide sculpture that sits between the Peoria Civic Center & City Hall recently got a much needed makeover.  The Junior League was an integral part of bringing this piece of artwork to the Peoria community back in 1983. 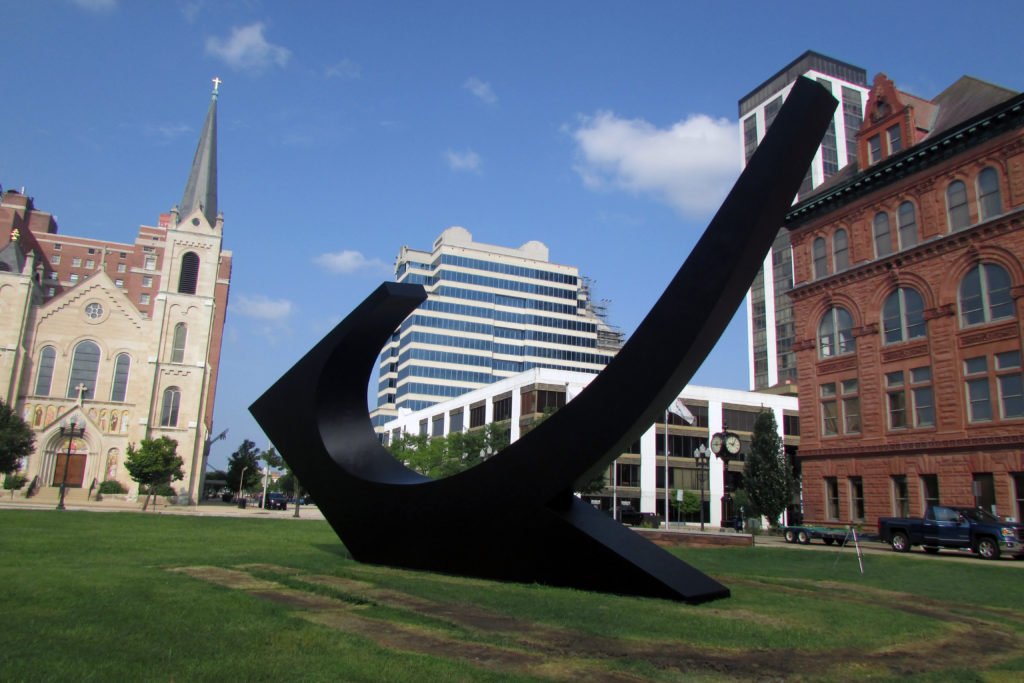 “By preserving Sonar Tide, we can re-educate the community about this and the many other public  sculptures in Peoria through our partnerships with community and government groups,” says Christina  Robinson, Junior League of Peoria President.

The $45,000 Sonar Tide restoration project is financed by the Junior League of Peoria and its  members, with support from sculpture benefactors John and Sharon Amdall, and grants from the  Community Foundation of Central Illinois. The Junior League sought input from the Peoria Civic  Center, the Peoria Riverfront Museum and the City of Peoria to make the project happen.

The Junior League consulted with the Riverfront Museum’s John Morris and Bill Conger to find the  right experts to complete the restoration. Bladen (known as a father of minimalism,) designed Sonar  Tide after several visits to Peoria. His Sonar Tide reflects Peoria’s industrial history, its relationship to  the Illinois River, and the Civic Center designed by Phillip Johnson.

Bradley University artists Fisher Stolz and Jaci Willis, along with graduate Taylor Fawcett are sanding,  sealing and refinishing the swooping wave that sits between City Hall and the Peoria Civic Center.  Works by Stolz and Willis are on display at Donovan Park, in Chicago, and elsewhere.

Sonar Tide was made in Peoria by Peorians. Van Buskirk Construction Co. built the sculpture from  Bladen’s designs. Born Paint mixed and delivered the finish and sealants. Pat Berres, who worked at  Born when the sculpture was built, consulted with Stolz and Willis on the restoration and provided modern products to match the original finish.

Phase one of the project is wrapping up as Stolz and Willis allow the paint to cure. Phase two will  begin soon, adding new landscaping and lighting to protect and highlight the sculpture.

The Sonar Tide restoration is attracting attention from other Illinois artists and sculptors who’ve driven  to Peoria to see the work in progress.

“It is no accident this happens as Peoria itself, having weathered the worst year in recent history,  begins to redefine itself,” says Conger, curator at the Riverfront Museum. “The very upward energy  and surging possibility that Sonar Tide spoke of Peoria is clearly in motion and it is spectacular to  see.”

Thousands of people walk by Sonar Tide each week on their way to meetings at City Hall or to attend  a sporting event, concert or other event at the Civic Center. Often people pose for photos with Sonar  Tide in the background. But do they know of the art’s significance? Do they understand how it helped  revitalize downtown Peoria in the past?