During the last General Membership Meeting for the 2016-2017, the Volunteer of the Year award was announced.

The 2016-2017 Recepient of the Volunteer of the Year was awarded to: Kendra Sipes. 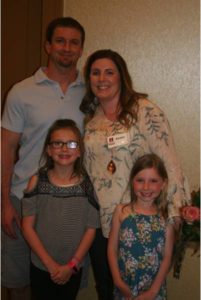 Kendra was recognized for over a decades worth of service to the League. She has shown constant commitment to fulfilling the needs of the League and its members in service on multiple committees and acting as a crucial bridge between two committees in particular.

It began a decade ago, in 2007, when Kendra joined the league as a new member. Jump forward only a few short years and she had already stepped up into an assistant committee chair role.  Her talents and unfailing ability to say “I will do this for you,” have enabled the League to maintain stability and ensure financial success over the past years of restructure and modernization.

During her role as chair of Frolic with the Fairies she built upon the creation of and vision by the first three successful Frolic’s and their chairs. She expanded the event so it was in a position to support the League when it became time to retire its long running fundraiser, Julep’s Closet. She has continued every year since, to play a critical role in this event, providing stability as it has passed through five chairs since. She also serves as vital bridge between the Events committee and the Public Relations Committee, to this day maintaining our Frolic with the Fairies webpage and Facebook page, both of which she created, and helping with all the various components of marketing Frolic to the public, and supporting Frolic, its chairs, and the Public Relations Committee from the sideline.

Professionally she maintains a very full schedule that includes being on the Board of Directors for the Peoria Area Association of Realtors as well as a full personal schedule, as a wife, and mother of two girls, and volunteering her time and skills to help with the Art Cart at her daughters primary school as well as with her daughters Girl Scout Troops. Despite her already demanding schedule, she once again replied “yes” to the League’s request for help. She stepped into the role as chair of the Public Relations Committee Chair and has spent the past several months giving back to the League ensuring that all the tasks and work of this committee that needed to happen did, and for this the League is truly grateful.